Preimplantation genetic diagnosis (PGD) is a very early method of prenatal diagnosis which was designed for couples who are at risk of transmitting an inherited disease to their children. More recently the PGD procedure has been used to help specific groups of infertile patients including older women, those with recurrent IVF failure or unexplained recurrent miscarriages. Such women are at an increased risk of producing embryos with abnormal chromosomes (aneuploid embryos). This modified PGD procedure is called Preimplantation Genetic Screening (PGS) and was previously known as ‘aneuploidy screening’ or PGD‐AS. For PGS, we examine several chromosomes in the embryo to determine how many copies there are. There should be two copies of each of these chromosomes in a normal embryo. The aim of PGS is to improve the pregnancy rate and to reduce the risk of miscarriage.

For us to carry out PGS you will have to go through routine in vitro fertilization (IVF) to generate multiple embryos to increase the chances of obtaining chromosomally normal embryos. In IVF procedures, to achieve a reasonable pregnancy rate, we usually transfer 2 embryos. We can usually only transfer a maximum of 3 embryos in women aged 40 years or more but after PGS the number is limited to two in this age group. It is important that you read the information leaflets on IVF.

We will use the technique of fluorescent in situ hybridization (FISH) to examine up to 6 pairs of chromosomes from the embryos (see Figure 2). The diagnosis takes up to 48 hours and so the embryos that are normal for the chromosomes examined can be transferred to the female patient the following day or the day after that. We are very familiar with this technique as it used routinely in the laboratory to test for chromosome abnormalities.

Preimplantation diagnosis was developed in the UK and the first cases were performed in 1989. Staff in the Genetics Department at University College London (UCL) have been performing PGD since 1991. The preimplantation genetic screening testing service is available in conjunction with the Human Genetics and Embryology Laboratory in the Department of Obstetrics and Gynecology. The first treatments in the UK for patients with chromosomal disorders and embryo sexing for X‐linked disease by FISH were developed by the team at UCL as well as those for many single gene disorders.

Problems that can occur during preimplantation genetic screening

Problems can occur during routine IVF treatment cycles for all patients:

These problems are described in more detail in the IVF patient information leaflets.

Other problems are specific to the testing itself as follows:

Finally, we urge you to fully consider the financial costs of treatment and the emotional burden should a successful pregnancy not result following embryo screening for aneuploidy before undertaking a PGS cycle.

An 8‐cell embryo is held in place while a single embryonic cell is removed for diagnosis (large arrow). The nucleus is visible in this cell (small arrow). 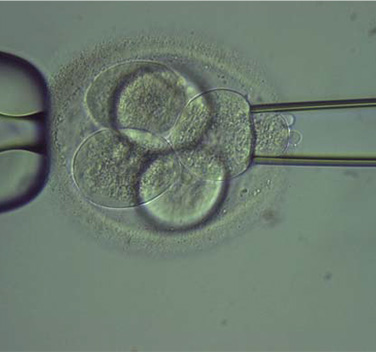 Two signals (normal number) of each color are seen in this cell indicating that it has a nearly 90% probability of being from a normal embryo. Chromosomes 13, 16, 18, 21 and 22 are represented by probes labelled in green, aqua, blue, red and gold respectively. 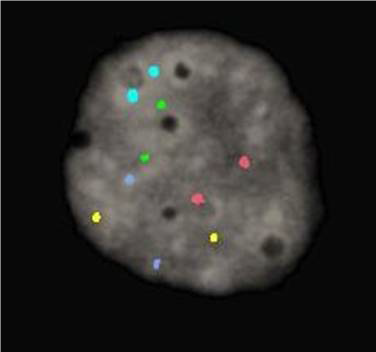 “Taking into consideration the protection measures for Covid-19, we want to offer you the best possible human and medical services even if we are from a distance. Schedule your first appointment today with the reproductive gynecologist & fertility specialist Dr. Fragoulidis Michalis either by phone at 00302106895001 or on our Skype “Fertility Design” and come one step closer towards accomplishing one of your biggest dreams!”